A woman is appointed by the ministry to show schoolchildren how food can be healthy and delicious. Her mission is to make soup in the classroom.

It’s her first working day. She has everything she needs to accomplish that mission – kitchen utensils and fresh vegetables –, but she finds the recipe she was given rather insipid and not very adventurous. So she decides to make soup with different ingredients, each of which reminds her of her childhood in another country, a country at war which she fled some time ago. While she is preparing the soup, the vegetables and the smells bring the memories flooding back: stories about her family, about the war and about the pig called Sonia she was so fond of…

"Potato Soup" was created 20 years ago by Agora Theater, which is based in the German-speaking part of Belgium. As food and stories in all kinds of combinations are Laika’s hallmark, Agora Theater approached Laika asking if they could rework the creation together. Aardappelsoep is a contemporary show about war and loss, about hunger and about the virtues of delicious soup. The show centres on the pleasure of narration and the enjoyment of eating together.

Maik Klingenberg lives in Berlin-Marzahn and he will spend his holidays alone. Because his mother visits the „beauty-farm“ again, that is how she is calling the Rehabilitation clinic for alcoholics. His father has to be urgently with his young assistant on a business trip. But Maik is not angry, his father has left him two hundred euros and a storm-free shack.

Furthermore Tatjana, the class beauty, has not invited him to the hottest birthday party of the summer. But then Tschick bends around the corner, the Assi-Russian, who occasionally comes to the classroom smelling strongly of alcohol and usually radiates general disinterest. He comes with a stolen Lada and suddenly the summer smells of freedom and adventure. A wild-romantic trip through the province of Brandenburg begins with many strange but beautiful encounters. In a dump in the middle of nowhere they meet Isa, the mysterious crazy girl. Unexpectedly, Maik and Isa come closer ...

"Tschick" describes the beginning of a great friendship between two outsiders, the pain of growing up, the desire for adventure and everlasting summer holidays. A road movie for young and old, which has long since become a classic.

Two surreal characters live on different planes, they move along opposite sides and look at things from different points of view.

Each of them lives life with their own certainties and fears, both scared but curious to meet the other. Then, one day, the encounter.
Maybe by chance, maybe not, spaces turn upside down and points of view cross in an upturned place: a new, shared space where words told with the eyes and words drawn on blank sheets of paper become stories.

Objects and spaces change according to the eyes of the watcher.

The show contains the storylines of all famous dramas of the Nobel Prize winner Luigi Pirandello. It is based on the novel “The Tragedy of One Character”. The idea of “a theatre in a theatre” in this show offers us to travel into the world of theatrical reality, with its multiple spaces and nothing habitual 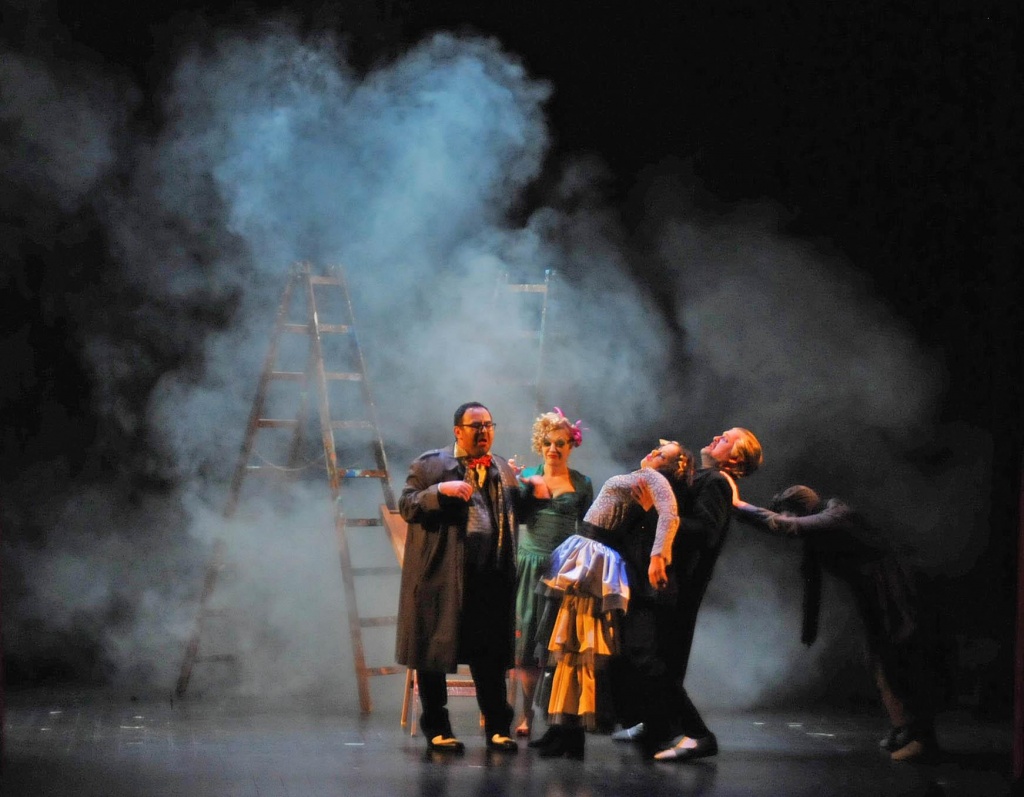 It is a striking and touching story, a true lesson of faithfulness and fidelity. A great show for the family to watch together.

Kashtanka – a crossbreed of a wiener dog and a mongrel is always hungry and often beaten by her master. She is a lonely little creature, who nobody needs, trying to catch happiness at its tail. 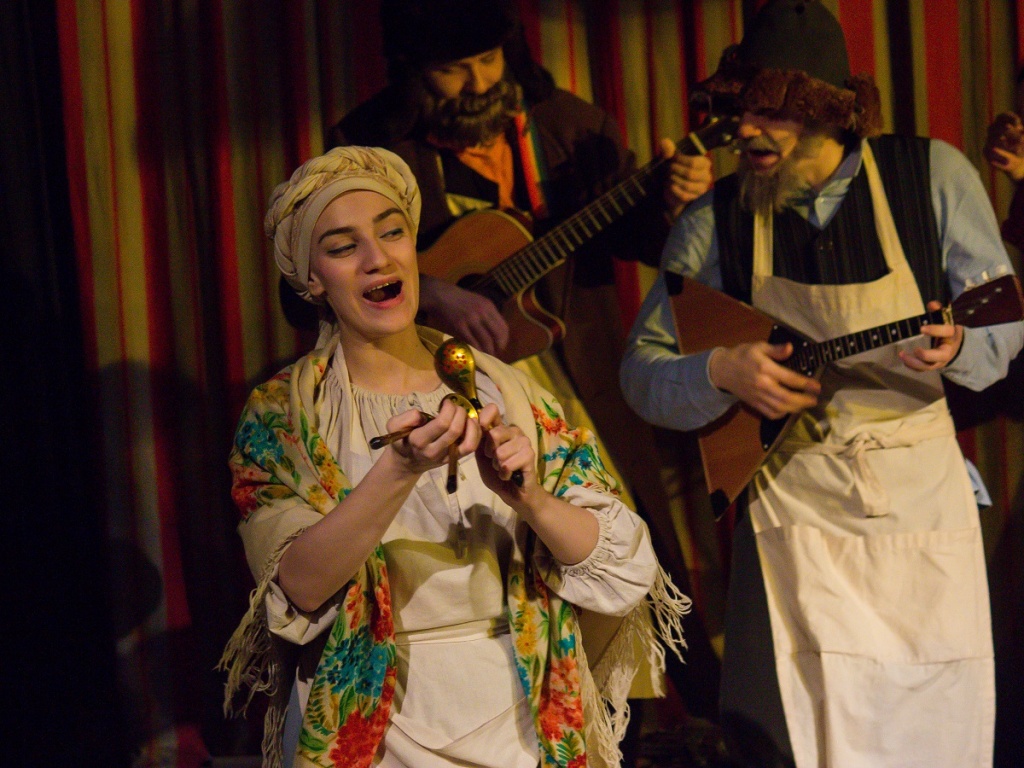 Duration 2 h 30 min with one intrmission

The main storyline of classical “Hamlet” has not changed, but this time it is played out by two clowns who perform ten different roles. Some particularly relevant contemporary themes are being emphasized more than others, such as humanity, the military activity of neighboring countries, the conflict between fiction and reality.

Despite of its name, it is a show about the world where there is place for friendship, love, dream and sports. Even when mines sign instead of birds, children are always children. Boys are waiting for Christmas presents and look forward to make revenge over the football team of the Red Cross Hospital. The play if full of drama, but such matters as war or disability are presented as symbolic and poetic and the dialogues on stage make grown-ups laugh just as well as children. 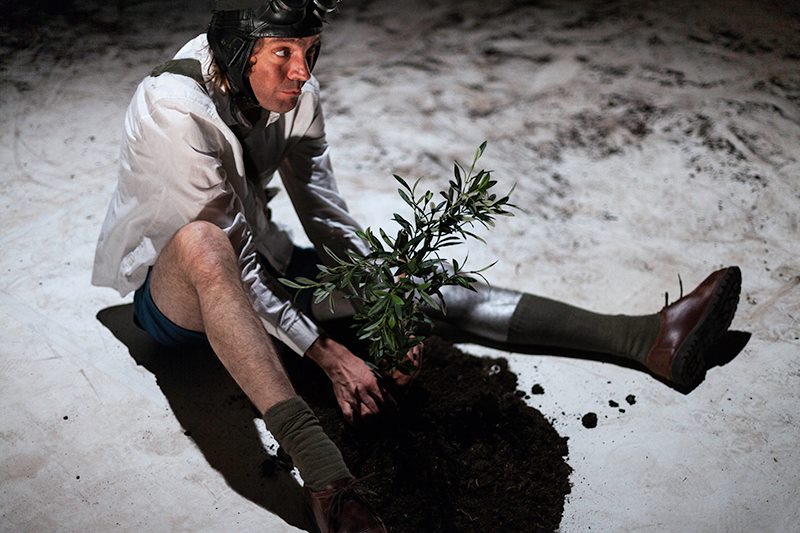 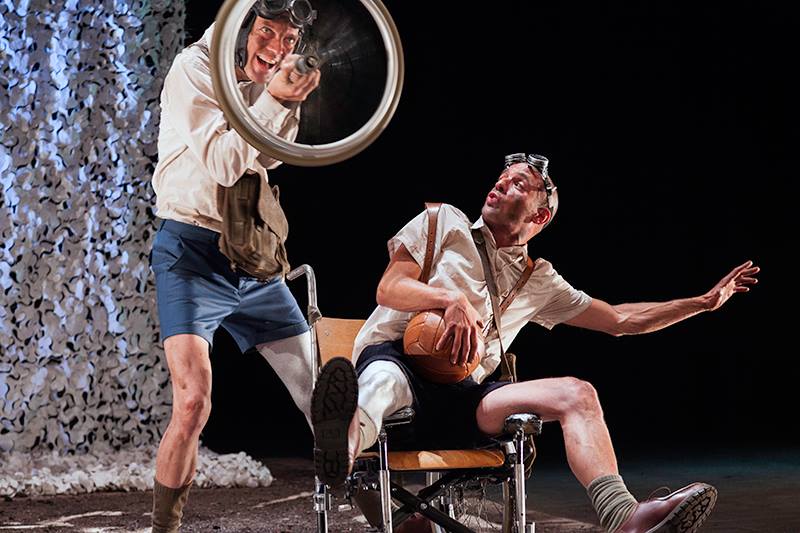 The story line of the play “Levsha” (left-hander), based on the novel by Nikolai Leskov, is a mixture of fictitious and real historical events.

In this play fantasy intertwines with eternal realities of life. It is the saga about endless generosity of the Slavic soul and great talents of the Tula past masters. The play “Levsha” raises the issues of the mission of each of us, of God’s gift, of a person’s role in the life of the country and of our responsibility for the future.

In his cabinet, Prof. Vakarmov, an eccentric genius somewhat at odds with the world that surrounds him, is deep in experiments to capture the pure sounds up to the limits of time and space. Assisted by Alberto KUNO, a deliciously chaotic, pragmatic and not always helpful fellow, his research on this extremely serious subject turns to a thick smog and cacophony. They go astray in this microcosm worthy of the golden age of alchemists and live a journey towards what they believe is infinite perfection. Before their return into reality, our two friends will reveal us hilarious creatures and equipment, which remained unknown until today.

Their unusual research leads us through a parody of magic illusions, real acrobatics, unexpected multi-instrumental performances, sub-aqueous and many more adventures…..but….

... but one question remains: by roaming the meanders of perfection, don’t they run after a illusion?

A strange trip through circus arts, music and absurd clowning through time and space. 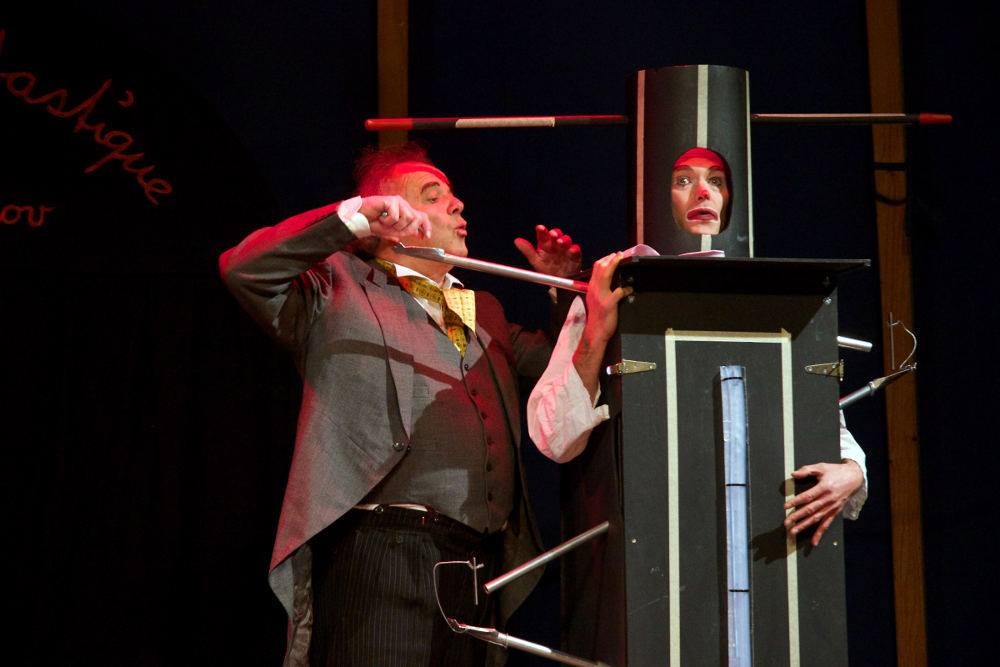 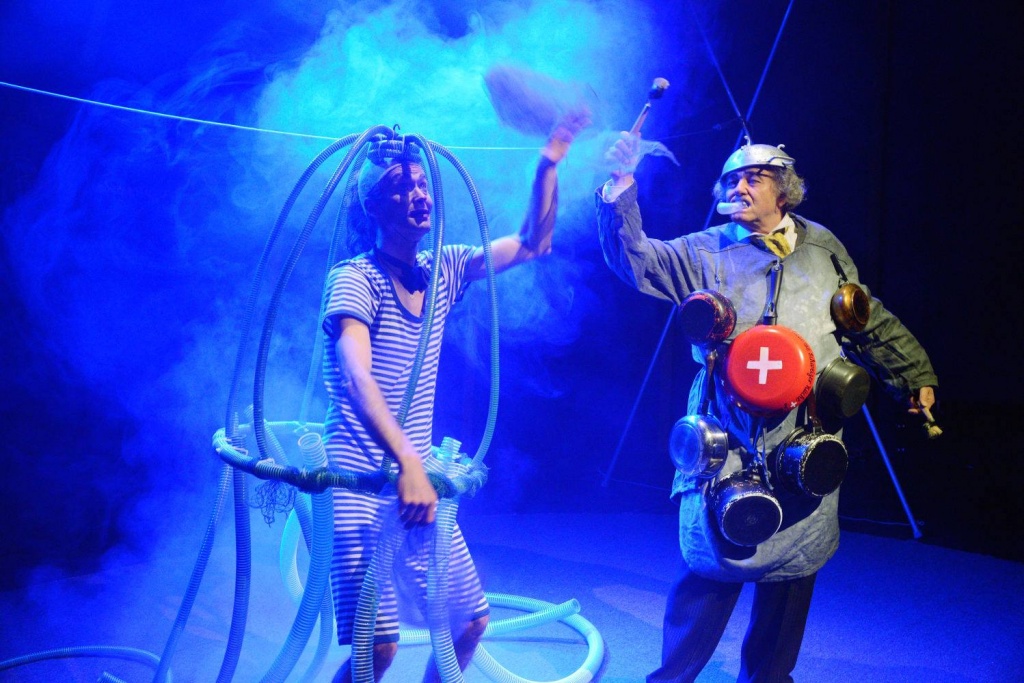 “Have you ever seen roses in the salad? I have...” (Bruno Munari)

“Vegetables are something serious!” says the Chef.

“Vegetables are something boring!” points out Romilda, his assistant.

To tell the truth, all you get in this kitchen are vegetables. Bad smells and a horrible taste: big and small, short and long, green, white, purple veg, chop and cook it with care and attention.

And what’s in a cauliflower? And in an onion? In a leek? And what about all the other vegetables?

Maybe, this time, Romilda and the Chef will change their minds…

The show draws the sights, but sets your fantasy free. He who decides to be under enchant, should be prepared to set off and discover new magic worlds where colours, lights, sounds answer his wishes.

Worlds apart, each of them with its own wonders, where you can meet aliens, samurais, fairies, angels, where there is a room for memories, dreams and feelings. The scenes are of a great visual impact and strike even those who are non longer babies, thanks to the originality of the sketches and to the evocative strength of some images. Tubes, clothes, hats, poor and

recycled material that, thanks to the imaginative use of the lights, turns into images, strange and funny visions, plastic scenes of a movement of fantasy.

There is no plot but the invented one by the three actors at the moment, thanks to their transformations.

And the plastic? Koreja had fun to transform it by playing with the simple objects of everyday life; and challenges you to recognise them.

The Peony Pavilion is a romantic tragicomedy play written by dramatist Tang Xianzu around 400 years ago. It has become one of the most classics in traditional Chinese theatre art, and Kunqu theater troupes can not consider their repertoire complete without this play.

It mainly depictes a love story between Du Liniang and Liu Mengmei. They overcome all difficulties, transcend time and space, life and death, and finally get together.

This version is highlighted by the young performers as well as the beautiful stage design. It was the opening performance for the 24th Beseto theater festival in Hangzhou, and well received by the audience home and abroad.

Now URSEL wants to be the center of attention! Whatever she does, her parents always compare her with her brother Urs, who fell out of the window at the age of three and died. URSEL wasn't even born then, and yet he decides her life. She fights for her place in the family and finally wants love and affection.

URSEL is not a psychological study of mourning, but rather a very practical story of emancipation: Ursel stands for joie de vivre, she manages to free the parents from their rigidity of grief, according to the motto "Like Ursel and took her parents with her." Of course, there are sad, shocking moments, when Ursel reports about her brother's accident, but the focus is on her and their needs here and now. A production that celebrates life and makes people think - both children and adults. even adults.

“AnnaBerthaCecillia” is a non-verbal performance about the alphabet. A small collection of visually strong stories –

portraits shown through puppetry. Every story is based on one letter - a capital letter connecting words across languages.

The audience can enjoy the stories and also look for the letters, codes and make their own discoveries

Antic hero named Orest, prince Amlet from Icelandic chronicles of the XII century, legendary Shakespearean Hamlet, romantic characters from the XIX century and the modern character Valya from the film by Kiril Serebryannikov “Playing the Victim”… A popular plot in the world literature about the protagonist who voluntary or involuntary confronts the whole world, about the one who is lost in himself and in time, the one who has to make the most important choice in his life… The theatre offers its vision of a well-known story.

Duration 45 min/15 min with one intermission

”FRAGILE” is a project exploring, through a magnifying glass, the character Laura - from Tennessee Williams´s play Glass Menagerie. Through her fragile presence we sink deep into mute yet joyful loneliness. FRAGILE is a visual theatre performance where the theatrical space itself is perceived as a performer. Through meticulous lighting, and almost obsessional details of gesture, we fall to pieces - together with Laura - into shards, which will doubtlessly need putting together again.

„When you look at the piece of delicately spun glass you think of two things: how beautiful it is and how easily it can be broken…“ Tennessee Williams

Black and white theatre about a secret of a dangerous table-game.

We all know, or should know, how dangerous but fascinating it is to play with electrical equipment… russian roulette, polish tango and czech-finnish weird humor mix together for a bizarre little evening with a table-game and a bottle of wodka.

Vassa Petrovna Zheleznova. Furious, passionate, dominative. Already aging, underloved, with the children that disappointed her… She is full of will to live and striving to keep the family business. Vassa is ready for everything for it. The woman trying to catch up on her happiness…